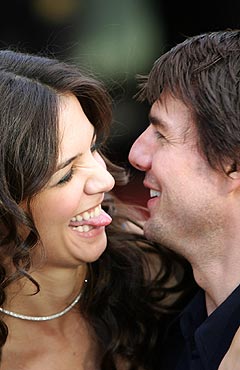 Tom Cruise’s finance & fellow Scientologist Katie Holmes gave birth to a baby girl last night. TomKat now has their little TomKitten. In a statement issued through Cruise’s publicist, the couple said that they “joyously welcomed” the new addition to their family.

The little girl’s name? No, not Orange, Apple or Moses, and sadly not L. Ron or Hubbard or even Xenu. Tom Cruise & Katie Holmes’ baby girl has been named Suri, a name the couple found in a book of baby names. The name translates to ‘Princess’ in Hebrew, ‘Red Rose’ in Farsi, ‘Pickpocket’ in Japanese (already a career in mind?) and ‘Will Soon Rule You’ in Scientology.

Tom’s publicist added, “Both mother and daughter are doing well.” Baby Suri is 7 pounds, 7 ounces and measures 20 inches long. Cruise has already appeared to be the overly protective father & assigned everyone in his staff & family different responsibilities in taking care if his little girl, kind of like the Mafia.

Cruise said soon after the birth, “I don’t think this kid’s going to be able to walk until they’re about 15! Feet aren’t going to touch the ground!” Either this is because so many of his loving staff & family members wish to hold the young girl, or that the Scientology spawn prefers to float & gravitate on this planet.

This is the first child for Holmes, 27, & the first biological warfare, I mean biological offspring, for Cruise, 43, who has an adopted daughter and son from his marriage with Nicole Kidman.

It’s a beautiful thing, the birth of a child. But I have only one question, how was the placenta, Tom?

A little Wednesday irony: It may be play dates for Grier Hammond Henchy and Suri Cruise, rather than Suri & Brad Pitt & Angelina Jolie’s baby. A healthy little girl was born to Brooke Shields and husband Chris Henchy yesterday. The couple have named their child Grier which means ‘watchful & vigilant’ in Scottish Gaelic. Hmmm… that’s a little interesting, back to that shortly.

According to Access Hollywood the Cruise child & Shields child were born in the same hospital, on the same floor and both weighed in at 7 pounds and measured 20 inches in length. Hmmmmm….. Last year Cruise famously criticized Shields on the Today show for her use of antidepressants to battle postpartum depression and they have been battling it out ever since.

OK, now back to the interesting part. A red-rosed pickpocket princess is born that will one day rule the world and on the same day, weighing & measuring the same, another girl child is born that will be watchful & vigilant? Oh, come on! It’s Cruise VS Shields, or Scientology VS Reality or The End of the World VS Nirvana. How plain can it be? Wow! I feel like I’m a part of the Omen or Rosemary’s Baby or even Little Nicky.

I guess I should send little Grier frankincense & myrrh to get in good with her early and extend my gratitude that she will some day take on the Suri Cruise spawn.