.
You are here: Home / Pregnant Celebrities / And Unto Gwyneth Paltrow & Chris Martin Baby Moses was Born 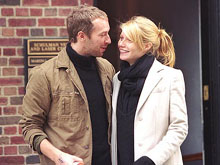 Gwyneth Paltrow has given birth to a baby boy, the second child for Paltrow & husband Coldplay rocker Chris Martin. The actress welcomed the boy into the world at an unknown location over the weekend. Paltrow had been hoping to give birth to her son using the underwater method, but rumors abound that the delivery had to be hastened by Caesarean section.

And the name is….. It looks like Mortimer is out, poor old Uncle Morty Spielberg. Paltrow & Martin have named their son Moses. Which kinda makes sense in a way. From what Paltrow said on Oprah, she likes the idea of Old Testament namesakes as well as the fact that she is a direct descendent of David HaLevi Segal, the 17th century patriarch from Krakow who was one in the line of the revered Paltrowich dynasty which gave the world another 33 rabbis and that’s a lot of rabbis.

The name Moses has other significance for Paltrow & Martin. Right before their secret wedding ceremony in December 2003, Martin wrote a song for his sweetheart Gwyneth entitled “Moses”. The lyrics to the song include, “Like Moses has power over the sea so you’ve got power over me….You’re a refuge, somewhere I can go. You’re air that, air that I can breathe, ’cause you’re my golden opportunity.” Martin has told fans that this song is the one he most enjoys performing. Now, that’s pretty sweet.

All in all, it’s a crazy baby-naming world out there and I’m not sure what I will bat when it’s my turn. Maybe Sookiepie Wallabee Shananana?