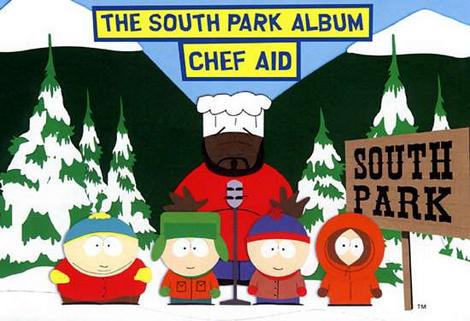 With Scientologist Tom Cruise allegedly forcing Comedy Central to pull a repeat of a South Park episode about the cult religion last week & Scientologist Isaac Hayes quitting the show a few days prior after being the voice of Chef since 1997, I thought we’d do a little piece on the topic itself.

My opener:Â  Beck & Jason Lee are dead to me.

Scientology, why it has the prefix of science I’ll never know, is a “religion” based onÂ the beliefs, teachings, practices, and rituals that originated as aÂ philosophy in 1952 by ex-sci-fi writer, L. Ron Hubbard, and characterized by the Church of Scientology in 1953 as an “applied religious philosophy”. Hubbard defined the word “Scientology” to mean “a study of knowledge”.Â  Hmmm, you know if Douglas Adams or Stephen King came out with a religion, I’d have to be aÂ little skeptical.Â

According to freedicionary.com, Scientology is “a new religion founded by L. Ron Hubbard in 1955 and characterized by a belief in the power of a person’s spirit to clear itself of past painful experiences through self-knowledge and spiritual fulfillment.”Â

All that is well & good, although I almost feel that the Church of Scientology might have had something to do with that vague definition.Â  Scientology is like a really pretty, but crazy girl.Â  She looks great & you’re having a nice time getting to know her, but it gets pretty freekin’ weird pretty freekin’ fast.Â  Scientologists believe that most human problems can be traced to lingering spirits of an extraterrestrial people massacred by their ruler, Xenu, over 75 million years ago.Â

These spirits (Thetans)Â then attached themselves to individuals in the contemporary world, causing spiritual harm and negatively influencing the lives of their host; for example drug abuse, rape, Michael Jackson, etc.Â  Your job as a Scientologist is to purify yourself of these attached spirits, therefore clearing oneself Â “of past painful experiences through self-knowledge and spiritual fulfillment”.Â  Wow.Â  It’s amazing indeed how vague the freedictionary.com definition truly is.

Having spilled some ofÂ the beans on Scientology,Â it strikes me as hilarious, laughable that Isaac Hayes & Tom Cruise are pulling South Park shinanigans after an episode made fun of the religion.Â  Hayes has been the voice of Chef for going on 10 years now & has poked fun of Christianity, Judaism & every other thought-of religion.Â  Yet he backed up his resignation from the showÂ with the statement, “Religious beliefs are sacred to people and at all times should be respected and honored.”

South Park creators Trey Parker & Matt Stone issued a statement themselves to Daily Variety saying, “So, Scientology, you may have won this battle, but the million-year battle for earth has just begun!Â  Temporarily anozinizing our episode will not stop us from keeping Thetans forever trapped in your pitiful man-bodies.Â  Curses & drat!Â  You have obstructed us now, but your feeble bid to save humanity will fail!Â  Hail Zenu.Â  The statement was signed “Trey Parker and Matt Stone, the servants to the dark lord Xenu.”

Those boys, they just keep me laughing.