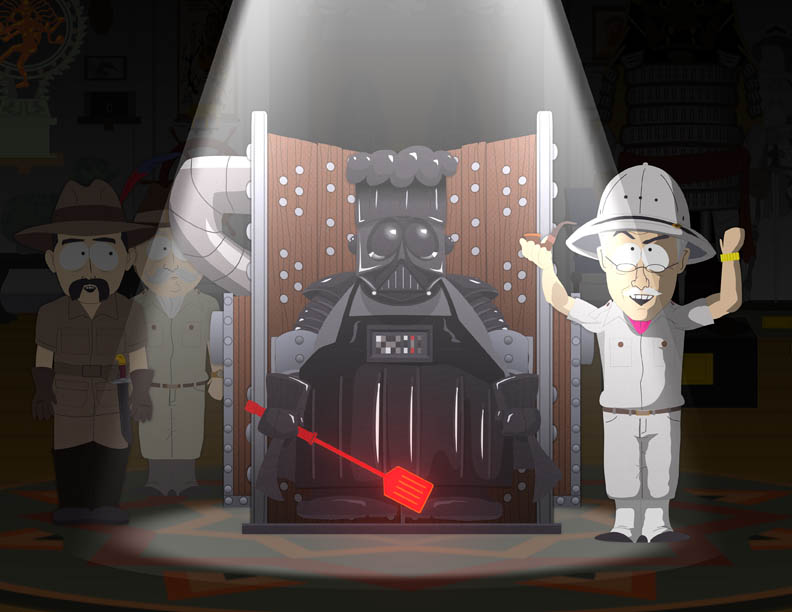 The season premiere of South Park was one not to be missed.Â  Chef is dead, maybe.Â  In response to itsÂ former star Isaac Hayes, who was the voice of the beloved Chef since 1997, turning his back on the show last week due to his “religious” beliefs being taunted; Chef returned to the land of South Park a pedophile.Â

The show was a satire on the whole Scientology thing andÂ those we are loosing to its unrelenting, ridiculousÂ grasp (quick, someone grab Beck away from Rabissi and run!).Â  Chef had left South Park to find adventure to replace the mundane and ordinary in his life.Â  He returned to South Park last night from traveling the world with the “Super Adventure Club” with all inhabitants overjoyed and tickled by his return.Â

However, Stan, Kyle, Kenny & Cartman sense something queer about Chef.Â  A quick note- Hayes did not participate in this episode, rather creators Matt Stone & Trey Parker patched together lines from previous recordings, making Chef sound a little jagged & pieced together. The boys try to get down to the bottom of his odd behavior, especially when Chef continues to state that we wants to “make sweet love” to them.Â

As is turns out, instead of Chef joining the “Adventure Club”, he joined the “Super Adventure Club” who’s mission is to travel the crevices of the world and have sex with little boys.Â  After realizing this folly, the boys take Chef to a physiatrist (oh no, Tom!) who confirms the boys’ fears and states that their friend has been brainwashed by the adventure club.Â  They then proceed to take Chef to a strip club to see if they can jog his “memory” for the ladies,Â he does indeed regain his strong sense of heterosexuality but only after seeing a fat-stacked black woman take toÂ the pole.

It looked like Chef was going to make it, but in the end the “Super Adventure Club” won Chef’s heart and mind back.Â  He wasÂ making his wayÂ across a swinging bridge to the arms of his pedophile cohorts,Â when the bridge collapsed and sent Chef tumbling down rock after rock and falling upon an upturned tree limb which acted as a spike through his chest. He is then shot by his fellow members, burned, stabbed & finally mauled by a lion and a grizzly bear who leave barelyÂ nothing behind.

“A lot ofÂ us don’t agree with the choices Chef has made in the last few days.Â  Some of us feel hurt and confused that he seemed to turn his back on us.Â  But we can’t let the events of the past few days takeÂ away the memories of how Chef made us smile.Â  We shouldn’t be mad at Chef for leaving us.Â  We should be mad at that fruity little club for scrambling his brains.”Â

In the last scene of The Return of Chef, the “Super Adventure Club” raises Chef from the dead by using the Darth Sidious approach and rebuilt the man Chef. When metal coupled with flesh in the form of cyborg implants and enhancements required to sustain him,Â Chef’s transformation was complete. He was no longer Chef. He was Darth Chef with a golden, glowing spatula of terror.Â  Will Chef one day reveal he is Cartman’s father and be saved from the dark side?Â  I can’t wait for the reappearance of this new turn in Chef’s character.Â

What a true and hilarious send-off for Chef as well as Isaac Hayes and a smack on the face for that fruity little Scientology club for scrambling the brains of some good ones- I’m so serious, someone go nab Beck from the evil claws of his clansmen and de-brainwash the man!Â

It’s good to have Matt Stone & Trey Parker up in Hollywood taking up for the sane folks.Â