.
You are here: Home / Career Moves / All About the GQ Cruise, Tom That Is 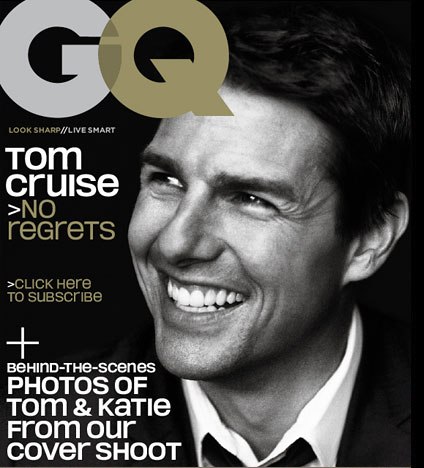 Tom Cruise wants the fruit of his loins to play with baby Jolie-Pitt. In an interview with GQ magazine that will hit stands the 25th of this month, Scientologist Cruister revealed many things about himself, mainly that he still has Katie under capture and plans to go ahead with the “silent birth“, that he & Holmes’ baby could play with Angelina Jolie & Brad Pitt’s baby & that he can get you off heroin in three days time.

Defending the controversial Scientology practice of giving birth in silence, or maintaining a quiet atmosphere during the delivery, Cruise said, “It’s about respecting the woman. It’s not about her not screaming.” Hmmm. What would Cruise’s old grammar teacher say about that double-negative?

Fellow Scientologists John Travolta & Kelly Preston encourage the young Katie Holmes to embrace the Scientology church’s doctrine of a silent birth. Preston explains, “It’s just because everything in moments of pain is really recorded and you want to have that (the birth) peaceful and clear of sort of suggestions or different words that can then affect them (babies) in their future.” That must have been some good Theton crack she was smoking that day, did that many any sense at all?

It looks like Katie has friends all over the place trying to get her through this whole I’ve-been-knocked-up-and-kidnapped-by-brainwashing-extraordanaire-Tom-Cruise-Help-Me! thing. Apparently Holmes has asked Victoria Beckham to be her birthing partner, after Tom introduced the two recently. Victoria & David Beckham converted to the biding arms of Scientology in 2004 after striking up a friendship with none other than Tom Cruise.

A source told Grazia magazine, “Victoria and Katie have struck a real rapport ever since they were introduced by Tom and both of them are thrilled by the friendship. Victoria has become something of a mother hen to Katie, so when she was asked if she would be with her during the birth, she said yes straight away.” Doesn’t really clarify who asked ole Victoria to be the partner, though, does it? Those Super Adventure Club members, they just kill me. I mean really. They’re here right now trying to kill me.

During the GQ interview Tom joked around that his baby could play with the Jolie-Pitt baby, a little presumptuous I’m afraid. And I’m not so sure that little Zenu would play nice.

Tom always finds a way to introduce his psychiatric soapbox into any interview, an the GQ interview was no exception. He has freshly attacked mind-altering pill-poppers about the harms they may be getting themselves into.

“I’ve always found that the ‘if it makes me feel better, it’s OK’ rationale a little suspect. I think it’s appalling that people have to live a life of drug addiction when I have personally helped people get of drugs.” I can just hear Katie now, “Tom, Tom, if we loosen the ropes around my legs and arms, it feels better.” And Tom Tom’s reply, “Katie, quite frankly, I find that highly suspect.”

In the interview Cruise claimed that he can get anyone off heroin in three days using the Scientology detox program which basically extracts $3 million dollars from your bank account and therefore wakes you out of the drug stupor chasing Tom Cruise & his Scientology gang members and yelling in a dark alley for sweet revenge and retribution.