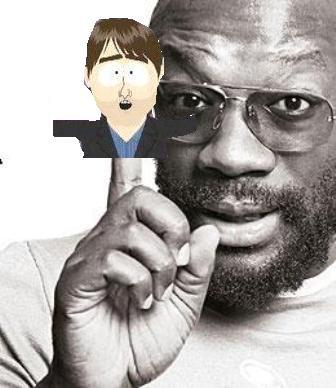 Scientologist Isaac Hayes has slammed & denied reports that a stroke was the real cause of his departure from South Park.Â  Earlier this month a frenzy ensued when Hayes issued a statement that he was leaving the show, afterÂ voicingÂ the roleÂ of Chef since 1997,Â because of the show’s lack of sensitivity towards religious groups.Â  Apparently it took Hayes almost a decade of poking the irreverent stick at religions to grow concerned about his actions.Â  But, you know, maybe, just maybe,Â it was because of that whole Scientology episode….

Another possible reason has come to light forÂ Hayes’s retirement from South Park.Â Â Last week a report stated that Hayes had suffered a stroke in January and was unable to stroke his soulful voice into a hard day’s work.Â  Isaac Hayes Entertainment spokesperson Amy Harnell has since denied this report and stated that the singer had not been debilitated by a stroke, rather had checked himself into a Tennessee hospital for high blood pressure & exhaustion.Â  Tennessee?Â  A black hole state where you’re likely to lose your dog, your wallet and you wife and end up being the story of a country song.Â  I just don’t see Isaac as a Tennessee man, more like a Chicago or NY City man.Â  Maybe he likes rocking chairs, whittling and young, white country women, who knows.Â  He is on his fourth wife after all.

I do know that thisÂ stoke thing is a bit silly, as we all know he hadÂ a Scientology strokeÂ several years back and I’veÂ been rooting for the Thetans ever since.Â  The 10thÂ seasonÂ of South Park premieredÂ on Comedy Central last Wednesday.Â Â With the fracas of Hayes quitting due to theÂ evil gripsÂ of Scientology on the horizon, creators Matt Stone & Trey Parker crafted an episode in which Chef was brainwashed byÂ the mysteriousÂ “Super Adventure Club”.Â Â Stone & ParkerÂ usedÂ Isaac’s past voice work to piece together the voice of the loveable ladykiller Chef.Â  The show drew 3.5 million US viewers, the most since 2002.

So for high TV ratings, loose the Scientologist and regain your audience.Â  Is that the lesson here?