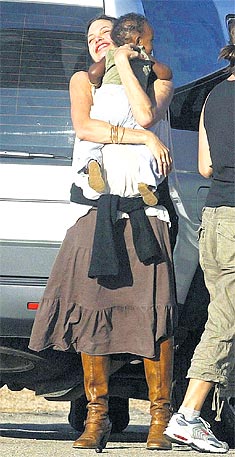 A local governor in Namibia has confirmed that Angelina Jolie, seen here with adopted daughter Zahara at an airstrip near Namibia, & Brad Pitt will have their baby in the African country. According to The Sunday Times of South Africa, Samuel Sheefeni Nuuyoma, the governor of the Namibian province where the couple is staying, met with the stars this past Friday.

“They are having the baby here, and they talked about giving the child a Namibian name,” stated Nuuyoma. He said Jolie had made the Namibian name choice because “she loves Namibia.” Although it remains to be seen if her love will be reciprocated.

After Jolie & Pitt hired security specialist Mickey Brett to securitize their resort lodgings at the Swakopmund Hotel & Entertainment Center, locals have been threatened and chased off public beaches. According to local press reports, Mickey Brett, the same Mickey Brett who worked for Nicole Kidman and was arrested and later released following the 1993 murder of a millionaire tycoon in London, has closed off roads around the Swakopmund resort and chased local children from nearby public beaches.

Brett has also threatened reporters and photographers with physical violence. Here he is now, “If I find anyone gettin’ a picture of Jolie, I will [email protected]*ing smash someone to pieces. I’m not joking. I’ll fu#$ing put someone in hospital. Tell your friends.” Wow, what a catch. What’s he like on a date?

Jolie & Pitt are expected to be in Namibia for the next six weeks, if they are not carted off and thrown into the Atlantic Ocean by locals first. One Namibian resident states, “I sympathize with Brad Pitt and Angelina because they do want privacy, but on the other hand they are public figures and there is a lot of interest in their visit. From what I hear they are nice people but their security guys most certainly aren’t.”

Well, if Angelina gives the baby a Namibian name, maybe all will be forgiven. Otherwise, Jolie should think of naming the love child ‘Crayfish’ after the ocean inhabitants they will meet in the Atlantic after being cast in by irritated Namibians.