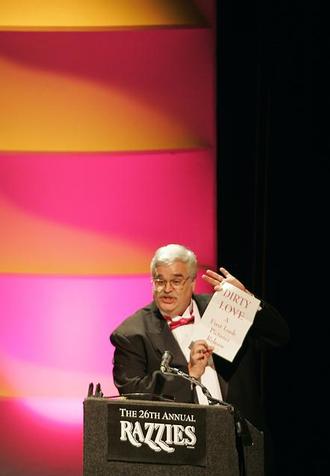 RAZZIE Founder John Wilson holds up the envelope revealing 2005’s “winner,” Jenny McCarthy‘s lame little “romantic comedy” DIRTY LOVE. DIRTY was also dis-honored for Worst Actress, (written by McCarthy) and Worst Director (McCarthy’s soon-to-be-ex husband John Asher). In introducing the clip from this film, Wilson referred to DIRTY LOVE as “the bastard child that might have resulted had John Derek, the RAZZIE “Winning” Write/Director of BOLERO and Tom Green, the RAZZIE “winning” writer director of FREDDY GOT FINGERED spent a winter together tending sheep on BROKEBACK MOUNTAIN.”The 26th annual Golden Raspberry Awards has their ceremony Saturday and it looks like everyone is sick of TomKat. The Golden Raspberry Awards were created by John Wilson in 1980, intended to compliment the Academy Awards by honoring the worst acting, screenwriting, songwriting, directing and films that were offered that year. Awards are voted upon by the membership of the Golden Raspberry Award Foundation (GRAF). Traditionally nominations are announced one day before the Oscar nominations and presented one day before the Oscar pomp & ceremonies.

A raspberry is a plant that produces a tart, sweet, red composite fruit in late summer or early autumn. In the irreverent sense, as used by the GRAF, the term means “blowing a raspberry” or a Bronx cheer & means to make a noise made to signify derision, made by sticking out the tongue between the lips and blowing to make a sound reminiscent of flatulence. In the terminology of phonetics, this sound does not appear to have an official name, but might be characterized as a labiolingual trill. So, it’s basically the fart award.

This year’s Golden Raspberry Awards winners were no less entertaining than last year. The worst picture fell to Jenny McCarthy’s masterpiece Dirty Love for which she starred and held the title of writer. Worst Actor went to Rob Schneider in Deuce Bigalow: European Gigolo, which as far as I am concerned, should continually be a Golden Raspberry nominee. Jenny McCarthy won again for Worst Actress in Dirty Love, with Paris Hilton taking Worst Supporting Actress for House of Wax.

The Golden Raspberry Awards added a new category this year, Saluting the Celebs We’re All Sick & Tired Of. And guess who won! No, not Brad & Angelina. Or J Lo and who she married this week. It was Cruise & Holmes. I just can’t believe it was TomKat! Who is sick & tired of hearing about the sweet & charming love Tom Cruise and Katie Holmes share in a beautiful love cocoon? Am I the only one who lavishes in hearing the latest pregnant kicks, sonogram news, kisses in the dark or PDA at funerals?

Chin up, TomKat, you’ll always be tops to me. 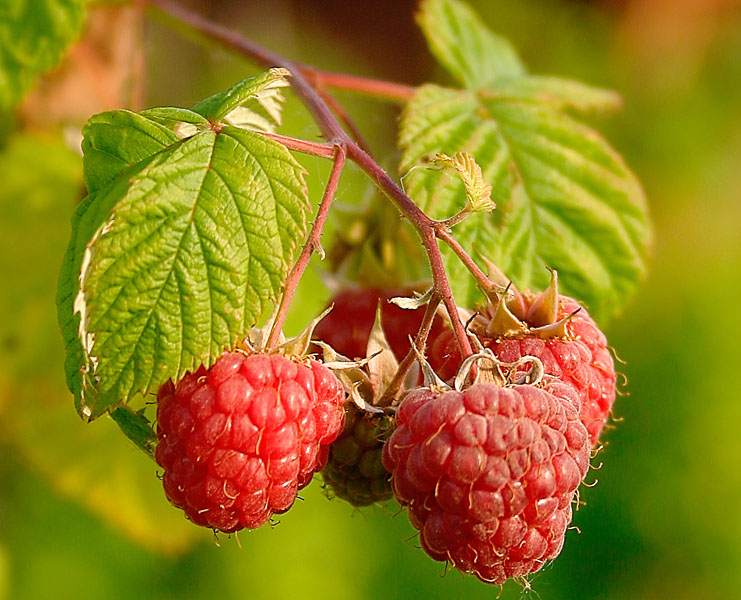