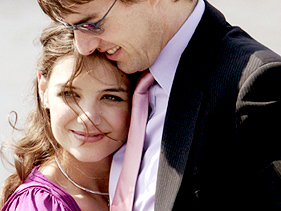 Well, it looks like Katie might already be giving baby Suri the high hat. Katie Holmes has begun making wedding plans. From the dress to getting her body back to its slim feminine self, Katie is getting ready for the Cruise / Holmes wedding day.

Holmes has met with the owner of Buff Brides, a company that sculpts bodies for the big day. Katie hopes to work on her shoulders and back so she can look stunning in her wedding gown. A source tells TMZ that Katie’s dress is a sleek strapless A-line cut straight across at the bust, form-fitted at the waist and falls to the floor. It should be a lovely affair, I wonder who will preside over the ceremony, the spirit of L. Ron?

In a related note, Nicole Kidman has congratulated Katie on her birth to Suri but made no mention of Tom Cruise in her statement released through her publicist, “I hope both mother and baby are doing well.” Which I think translates to, “Get out while you can, Katie. Get out while you can.”

Tom Cruise & Katie Holmes have their hands full these days. Planning a wedding, beginning the path of parenting as well as the new path for Katie of brainwashing, I mean Scientology. Speaking of which, it looks like Katie did indeed ask for an epidural despite the Church of Scientology’s belief in restraining from such drugs. Holmes did, however, seem to maintain a quite atmosphere during the delivery with everyone in the room staying silent and the nurses using hand signals.

Do you train for that in medical school? I guess it would be the In Case You Ever Have to Deal with Scientologists During a Delivery nursing lesson that reviews hand signals for “We may have to perform a Caesarean!” or “Is the head really suppose to look like that?”.