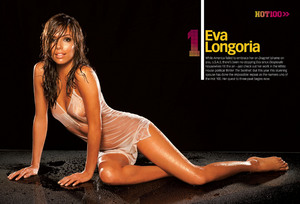 Desperate Housewives Eva Longoria has scored again.Â  Longoria remains the number oneÂ hottie in Maxim’s annual Hot 100 list for the second yearÂ running.
Â
Maxim’s list names the mostÂ beautiful & successfulÂ women in film, TV, music, sportsÂ & fashion,Â or as they put it, thoseÂ who have “a tremendous amount of buzz surrounding them, undeniable beauty and a promise of greater things to come.”

Eva Longoria is the very first to receive the top hottie spot back-to-back. Which eitherÂ means she’s the sexiestÂ woman around or the girl knows her way around a bribe.Â Â Â Â Â

LongoriaÂ was ecstaticÂ with the honor saying,Â “I was actually really shocked last year when I made the list and then to get it a second time in a row–I just couldn’t believe it.”

Here’s a sneak peak at the top ten Maxim hotties:

Notable omissions on this year’s list include Britney Spears– gee, I wonder why; new mom & Scientologist in-training Katie Holmes; Jennifer Lopez– if your husband grabs himselfÂ more thanÂ he does you,Â I think you get the bootÂ & Salma Hayek– she’ll always be in my top ten.

Longoria’s Desperate Housewives co-stars Nicollette Sheridan & Teri Hatcher also made the list with Sheridan at #48 & Hatcher weighing in at #73.

Longoria adds, “I would have voted all of our Housewives on the list.”Â  Eva’s thought process on that one- “I would make Nicollette #99 & that evil bitch Teri at #100.”

Eva states that her beau Tony Parker is thrilled with the top hottie news, “He’s very proud. He thinks he’s with a beautiful girl every day, so for him, it’s you know, someone else solidifying what he already thinks.”

Sure, like a mirror or a set of eyeballs wasn’t enough.

Take a detailed peak at the full list here.