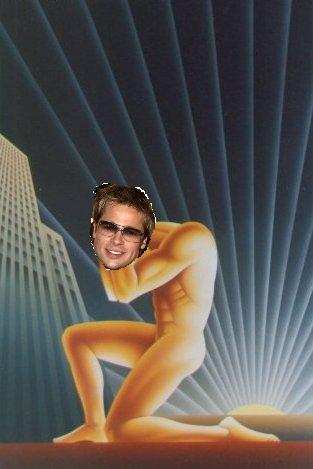 Lionsgate FilmsÂ purchased theÂ rights to the film version of the 1957 novel, which is considered to be one of the most influential books of modern history.Â  I dunno, I’d pay good money to see gambler & fellow Russian writer Fyodor Dostoevsky take on Rand in the literary ring.

According to Variety, the paper which subscribes to the spice of life, Angelina Jolie & Brad Pitt would play the lead roles of Dagny Taggart and John Gault.Â  I can see that.

Here’s anÂ excerpt from Atlas Shrugged that describes Dagny in alluring detail, is this the perfect role for Jolie?

“He saw a girl standing on top of a pile of machinery on a flatcar.
She was looking off at the ravine, her head lifted, strands of
disordered hair stirring in the wind. Her plain gray suit was like a
thin coating of metal over a slender body against the spread of sun-
flooded space and sky. Her posture had the lightness and unself-
conscious precision of an arrogantly pure self-confidence. She was
watching the work, her glance intent and purposeful, the glance of
competence enjoying its own function. She looked as if this were
her place, her moment and her world, she looked as if enjoyment
were her natural state, her face was the living form of an active,
living intelligence, a young girl’s face with a woman’s mouth, she
seemed unaware of her body except as of a taut instrument ready to
serve her purpose in any manner she wished.”

You know, the more I read it the more convinced I am that I am the one to play this part!Â  Get Lionsgate on the phone, Jeeves!

The story revolves around theÂ futuristicÂ economic collapse of theÂ US and illustrates Rand’s philosophy of objectivism.

Producers Howard and Karen Baldwin will adapt theÂ 560,938-word novel into a feature film, a task I do not envy.Â

Over the many years Clint Eastwood, Robert RedfordÂ & Faye Dunaway have had ties to the project.Â  It’s just another Hitchhiker’s Guide to the Galaxy.Â  We’ll probably be lucky if we see it in our lifetime.