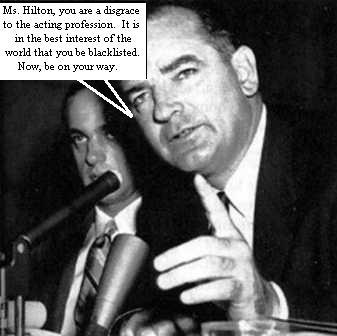 I can’t tell if Paris is just a news whore, or if I’m becoming the Paris Hilton News Update Central.Â  I’m fairly certain it’s going to fall to the former.

In a move Joseph McCarthy himself would be proud of, Vanity Fair’s editor Graydon Carter has blacklisted our little socialite and vyer of Charlize Theron roles, Paris Hilton.Â  Paris was banned from attending the much sought after, invitation only post-Oscar Vanity Fair party.Â

The party’s guest list this year was at a mere 500 with Madonna, Teri Hatcher, Jennifer Anniston,Â Nicole Kidman, Heath Ledger, Joaquin Phoenix & Jennifer Lopez in attendance.Â  The festivities were held at Morton’s Restaurant in Beverly Hills.Â

In an almost Mrs. Dalloway approach Graydon, a complicated man in his own right stated, “Paris who?Â  She will never attend one of the parties I host.”Â