.
You are here: Home / Pregnant Celebrities / Britney Spears Comes Out of Pregnant Closet on David Letterman 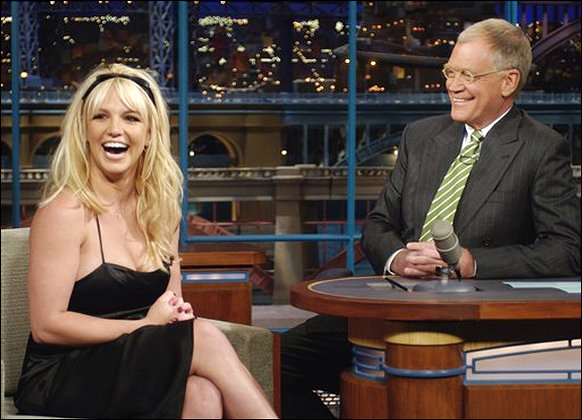 Britney Spears showed up lastÂ night at a taping ofÂ theÂ Late Show with David Letterman.Â  Despite the fact that you normally, celebrity or no, have to book an appearance on Letterman weeks in advance, the pregnant star was able to tell all that she’s pregnant again.Â  Didn’t everyone already know that by now, Brit?

Spears walked onto the show, as her song My Prerogative was being played by the Late Show band, and stated she was indeed pregnant, yet again.Â  “Don’t worry Dave, it’s not yours.”

“Oh. Well, I think that’s good news for both of us,” Letterman joked.Â  “So, we’ve established now that you are in fact pregnant, is that right?”

“Yes, sir,” she replied with wild call & applause from the audience. Letterman then took Spears’ hand and kissed it and probably whispered something to the effect of, “Get out while you can, Britney.Â  K-Fed is nothing but a no-good red neck and we could really have something beautiful together, you and I.”

So, now we know for sure that the Brit bump isn’t Cheetos & RC Cola, but another Kevin Federline spawn.Â  Damn, I was really hoping for the Cheetos bit.