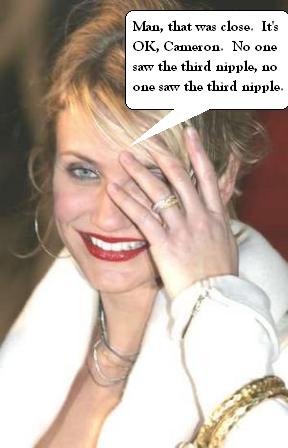 Cameron Diaz is kicking her heels up in celebration after winning damages in her long battle legal style.Â  Diaz has gone head to head with imprisoned photographer John Rutter who attempted to sell topless photos of the Hollywood queen.

The photos, both still & video, taken by Rutter were shot over ten years ago before Diaz hit it big with The Mask in 1994.Â  Rutter pursued Diaz to sell the images back toÂ herÂ for the small amount of $3.3 million.Â  When Diaz refused the offer, he threatened to sell them to a European advertising firm for $5 million, so he was trying to cut her a deal on the price.

The stuff hit the fan, as it were, Rutter was arrested and imprisoned following a conviction of felony charges for forgery, perjury and attempted grand larceny.Â  You don’t mess with America’s sweethearts.

Cameron Diaz’s publicist Brad Cafarelli confirmed that the actress was awarded damages by a Los Angeles judge last month.Â  The judge also ruled that the images will never be seen (because they will be in his desk drawer beside the coconut butter lotion) after granting a permanent injunction on any sale, license or any use of the photos or video.

And that my friends, is why you should always photograph nude up-and-coming actressesÂ whoÂ won’t cave inÂ to intimidation and threats.Â  Like Lohan maybe.