.
You are here: Home / Awards & Accolades / The Grammy Awards, What You Want to Know 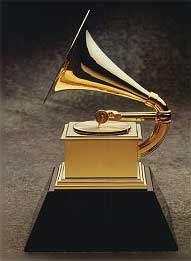 Wow! What an enchanted evening with all our favorite musicians under one roof, with explosive performances by Madonna, Gorillaz, Coldplay, John Legend & Faith Hill. And did you see “Desperate Housewives” Teri Hatcher steal looks with that not-leaving-too-much-to-my-imagination frock?

U2 was the big winner last night, sweeping the 48th annual Grammy Awards with five wins including Album of the Year for How to Dismantle an Atom Bomb and Song of the Year, Sometimes You Can’t Make It On Your Own. It looks like U2 will be able to make it.

But what left the most imprinted memory for me was not U2, Mariah, Teri Hatcher’s underwear or even thinking, “Are we all sure Prince is straight?”. No, I have to say that the most fascinating thing to me was Madonna’s performance.

So, she’s doing her tightly choreographed number with many other talented dancers, it was like a 70’s dance party out there. And all I could think was, what would it be like to be married to this woman? If I was her director husband, Guy Ritchie, would I be walking down the stairs be-robed with coffee and paper in hand, and suddenly Madonna would pop out behind the living room door with a red leather number, dancing in alluring formation with a troupe of Cirque du Soleil dancers? I’m just asking, maybe it’s just me.

Any way you look at it, it was a night not soon forgotten. Whether it be how U2 surprised us all this year, feeling Mariah’s disappointment (she was thought to sweep the Grammy’s herself this year) or seeing the Teri Hatcher from your dreams, strut her stuff on the red carpet. I had a wonderful evening, as I hope you did, and I look forward to the 49th annual Grammy Awards.