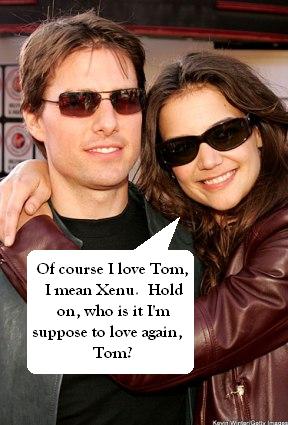 With Tom Cruise & Katie, I mean Kate, Holmes out & about, I thought we’d do a quick roundup update on the duo.Â

In a recent interview with Good Housekeeping, Cruise said his adoptedÂ Bella approved ofÂ Holmes right from the start.Â  Â

“After I began dating Kate, Bella looked at me and said, ‘Don’t let this one go. She’s the one.'”

That’s pretty sweet and what you would really want to hear from your child about a potential new mate, but doesn’t it kinda sound like the 13-year-old has seen Casablanca too many times?

In other Cruise news, rumors have circulated that pal Jamie Foxx will be godfather to baby Suri.Â  Foxx denies and stomps on this rumor saying, “It’s a rumor. I did give them a nice basket to congratulate them but I’m not Suri’s godfather.”

And that wraps up the Cruise / Holmes Roundup Update.