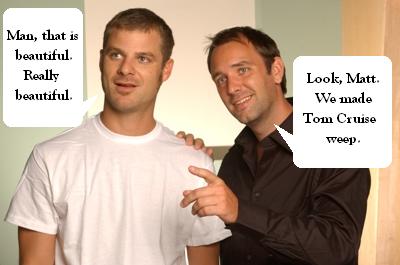 Tom Cruise has lost.Â  What has he lost?Â  Well- his dignity, his mind, Nicole Kidman is no longer a Scientologist and Katie, I mean Kate, Holmes looks a little blue these days.Â  But Mr. Cruise has also lost his battle to stop a certain episode of South Park from being shown in the UK.

The “Trapped in a Closet” episode mocks Scientology beliefs and shows a cartoony version of Cruise who locks himself in Stan’s closet while under the impression that the born again L. Ron Hubbard sees him as a failure.Â

On Monday the much-fought-over episode was shown at London’s National Film Theatre.Â  The show was originally take off the air by British TV network Channel 4 in January due to complaints.

An event planner stated, “If we were charging there may have been legal problems, but it was a free event, so it should be fine.”Â
Â
During the free screening at the theatre, creators Matt Stone & Trey Parker gave a brief talk about free speech and handed out free copies of “Trapped in a Closet”.

I like the way Matt & Trey work it.Â  Destroy & humiliate your enemy through open discussion and information, and then pass out the copies in the millions.