.
You are here: Home / Don't Worry- It's OK / You Are Now Free to Go About Your Life, TomKat Denies Breakup 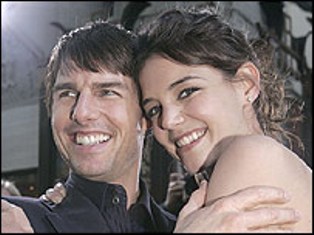 Yesterday in a swirl of tabloids and blogs alike, Tom Cruise and Katie Holmes were reported to have claimed their relationship- mission impossible.Â  Not the Valentine’s Day you would expect for the couch-jumping, frolicking couple.Â  But settle down & calm yourself, there may still be hope.

Cruise publicist Arnold Robinson said in a statement Tuesday, “It should be known that the story is 100 percent false.Â  Mr. Cruise and Ms. Holmes are still engaged and are moving forward with their wedding plans, as well as planning for the arrival of their child.”Â  Which is likely to be a furniture hopping alien.

But should we put our fears aside?Â  According to the Life & Style story, Cruise & Holmes “plan to keep up the charade of a romance until after their baby’s birth in the spring.Â  In the meantime, the couple will live in his Beverly Hills home- though sleeping in separate bedrooms- through the summer.”Â  Which just happens to be right after Mission: Impossible 3 is set to hit screens.Â  Hmm… coincidence?The TomKat couple gained mass media attention following Cruise’s unforgettable Oprah performance where he dribbled out his love for Katie Holmes through hugging Winfrey and trampolining her furniture.Â  Within two months of their initial hook-up, Cruise proposed to Holmes via Eiffel Tower last June.Â  By October, the couple announced their pregnancy with Cruise monitoring the fetus’ progress on his own sonogram machine– just happened to have one in the back of the closet, eh?Â  Does anyone else think he’s growing babies in his spare time to reincarnate L. Ron Hubbard?Â

Robinson went on to say, “Despite the maliciousÂ fallacies put forth by Life & Style magazine, the couple is looking forward to a long and happy life together as a family.”

Despite the heat, Life & Style have kept hold of the accuracy of their story announcing, “We stand 100 percent behind our story.”Â

Well, I stand 100 percent behind TomKat, no matter if they give birth to a little L. Ron or make sweet scientologist lovin’ onÂ The Daily Show.Â