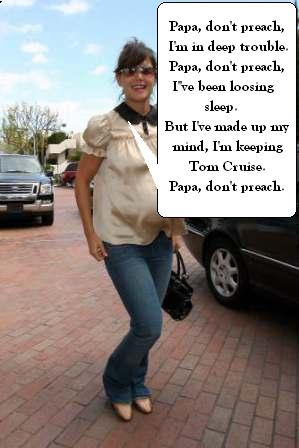 Katie Holmes, I mean Kate Holmes else Tom Cruise hits me over the head and says I’m not a woman, isÂ in the heat of weight loss battle after giving birthÂ to baby Suri on April 18.Â  Holmes is hoping to shed the pounds inÂ preparationÂ for herÂ marriage to Tom this summer.Â  These plans, however, haveÂ been met with opposition from Katie’s, I mean Kate’s, father.Â

As reported earlier, Holmes has already met with Buff Brides owner Sue Fleming who specializesÂ in diminishing pounds for bridesÂ in a matter of weeks.Â  Tom Cruise is overseeing the fitness regime since Katie, I mean Kate, can’t really do a lot of sit ups with her hands tied.Â  Much to the chagrin of her father,Â Holmes is dedicated to loosing her baby weight.Â

Martin Holmes tells British magazine Reveal, “My daughter needs rest, relaxation and recuperation. Katie is already doing exercises to build up her back and shoulders and I simply can’t go along with what is happening.”

Buff Brides Sue Fleming interjects,Â “Katie can and will do it. She has great motivation. She loves her fiance and was proud that Tom oversaw this program.

“He told her he wanted her to be the most beautiful bride ever. She was in tears when he said that.”

I’m pretty sure Katie, I mean Kate, was in tears because she should already be the most beautiful bride to Tom Cruise, I mean Satan.Â  And probably mingled with a little regret and painful chaffing skin due to the ropes on her wrist.