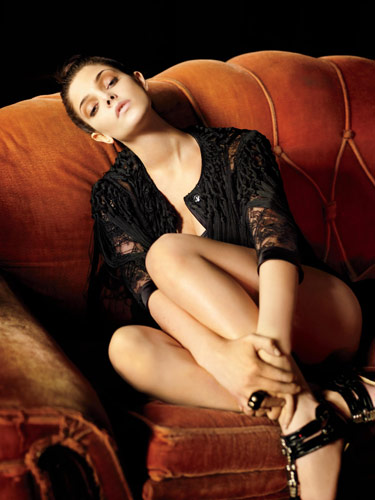 Yesterday I spoke about Ashley Greene dressing plain and causing a revolution that might cause violence to spread across the globe. I was truly worried for the existence of mankind and was already making plans for a new bunker under my house. Thankfully, Ashley has come to her senses and released a new set of pics that show she still has a little bit of style, albeit strange as hell.

Again, I’m not sure what is going on with these pictures, but they are definitely better than the one we saw yesterday which honestly isn’t that hard to beat. I truly believe she read my words and thought long and hard about her actions and I don’t think we will be seeing her in such an outfit again for a very long time. In my own way I just saved the world from total disaster so there should be a parade thrown for me.

I don’t want any marching bands in the parade though. They take up too much space and play music that nobody really cares about. Instead, all I want are those giant balloons you see in the Macy’s Thanksgiving Parade. I mean at least 100 of them because those are what people come to see at a parade. I don’t want to ride on a float, I want to ride Garfield.

That is how I am going to do a parade and it will be popular because as you can see it is fun. I’m betting you would even pay to come watch my parade because you have nothing better to do that day. The first pay to watch parade in existence and it is all because of Ashley Greene. I probably owe her lunch for this or something.

First it was Jessica Biel and now it’s Ashley Greene. I have never seen her take a photograph with this many clothes on or clothing this plain. I am confused by this trend and hope that it stops really soon. I know some people may be trying to change their image a bit, but this is simply taking it too far. If I have to start getting naked myself in public to change things up then I will do it. I just need a bit of warning ahead of time so I can get my body in shape. You don’t want a 300lb jalopy running around town telling everyone else that they need to get naked like them.

Could you imagine how bad Ashley would feel if this became true? She would be the cause of a revolution that would spark violence worldwide. If you didn’t know, violence is a very bad thing and to have someone spark it simply by wearing jeans would be outrageous. If you are going to spark some violence then have the Kansas City Royals win the World Series or something.

I’m getting upset thinking about this. I need to get into contact with her immediately to make sure that this was nothing more than a fluke. You can’t be young and sexy and expect not to show a little bit of skin. It’s not as if it is cold and she is dressing warm. She is dressing as though she is going to the mall on a Sunday. Absurd to the bird if you know the word without the turd. You heard?

And that folks is how I end this day. Don’t question the method, but explore the greatness and reset your mind.

Nothing like being the hottest Twilight star, guy or girl and not getting the good roles. These pics aren’t even the spicy ones, but I can’t post those because my boss won’t give them to me. He is in the back room using them to build a shrine or something, I don’t know what he does back there. All I know is that there are a weird noises that come from that place every time he goes back there. It gives me nightmares.

If you look at her resume on IMDB you can see that as time goes on, she is casted in less and less stuff. I guess I’m not the only one that notices that her looks trump everything else. This isn’t something she should be ashamed of, she needs to embrace the hotness and make the most of it while she can. It won’t last forever, ask Madonna, Meg Ryan and Cat lady.

Now I have to ask if women even wear Calvin Klein jeans. I thought they were geared towards men and if they are, seeing a hot pic of Ashley Greene isn’t going to convince me to wear them. Not when she looks better in them than I do.