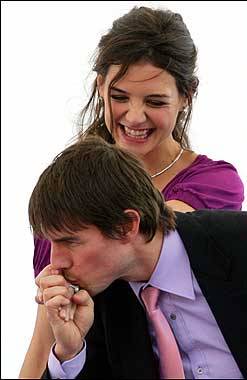 It’s been three months since the birth of Tom Cruise & Katie Holmes’ first child together & there’s still no word on when we’re ever going to see baby Suri.

Even good pals & fellow scientologists John Travolta, Kelly Preston or Lisa Marie Presley have yet to see the young tyke.Â  According to a source, friends Will & Jada Pinkett Smith have not seen the fruit of Cruise’s loins, despite many a call to the Crusie / Holmes household.

Right after Suri was born, the photoÂ agency WireImage stated that it would be offeringÂ photographs of Suri for auction.Â  Just days later, on May 11, the photo agencyÂ declared, “the baby shoot is on hold for now. There is no additional info as to when this may happen or if it will even happen at all.”
Â
I’m still convinced we haven’t seen the girl child Suri because she has red horns on her head & a bifurcated tail.Â