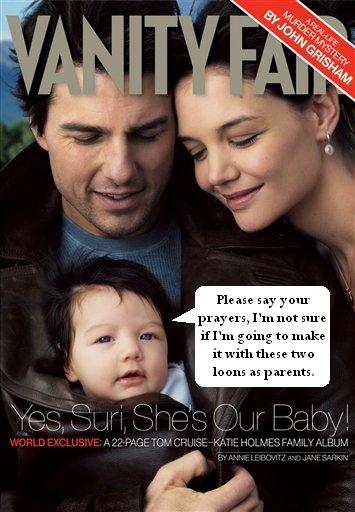 Katie Holmes has spokenÂ out in the latest edition of Vanity Fair.Â Â AlongÂ with the first photographs of her & Tom Cruise’s daughter Suri, Holmes has revealed to the publicationÂ how the media made her feel during the much-covered pregnancy & after.

The October edition of Vanity Fair features the first printed photos of five-month-old Suri, as posted yesterday, and also gives us a glimpse into the mind of Kate.

The 27-year-old tellsÂ VanityÂ that the gossip surrounding her family, “eats away at me because it’s just not okay… Some of the crap that’s out there–the stuff that’s said about my parents and my siblings (implying that they didn’t approve of her relationship with Cruise)–it’s really frustrating the amount of s**t that’s out there.

Holmes stated that the reason she even reads tabloids is because, “This is my future. This is my family, and I care so much about them.

“To see how someone as caring and good as Tom is–to see how things just get so twisted and turned around. I mean, where does it come from?”

I’m not sure, but I think that’s a pretty silly reason to read what’s out there- from bifurcated tails to faking pregnancies.

When Katie was pregnant with Suri, she said she was humiliated by the media stating, ” (I) was overjoyed being pregnant, and then had to withstand ridicule about my pregnancy when it was the most normal, non-controversial thing imaginable.”

Poor Katie.Â  But I have to say, she asked for it when she got with the craziest loon in Hollywood, the Cruisester.