.
You are here: Home / Mischief & Mayhem / Kate Moss Will Be No Jailbird 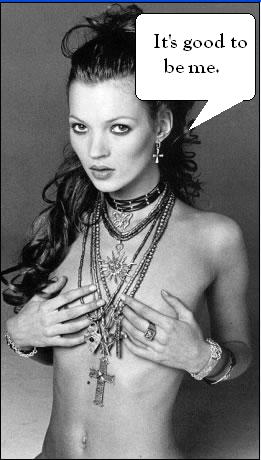 The British newspaper Daily Mail claims that Kate Moss is unlikely to be charged or inkaterized over her alleged use of cocaine in a London recording studio last year.Â  Due to insufficient evidence and Kate’s lack of any admittance to the charlie charges, it will probably just slip by and take the backseat.Â

In September the Daily Mirror published images of the supermodel which appeared to show her snorting cocaine in a studio where her then-boyfriend Pete Doherty was recording with his band Babyshambles, something he does rarely these days according to Morrissey.Â  Kate released a statement admitting “full responsibility” for her actions, although never stating what her actions truly were.Â  What a brilliant move by the Moss.

Interestingly enough, the police are concerned that Moss may have been set up by a music industry insider, who wanted the claws of Kate extracted from Babyshambles Pete no doubt, who had hoped to sell the images to a newspaper.Â  The image did catch a pretty penny, it is rumored that the Daily Mirror paid handsomely for the Kate-sniffing-coke photo,Â the likes of $262,500.Â

It’s the George O’Dowd principle all over again.Â  Be a celebrity not for the worldly goods, but for the ability to weasel out of trouble.