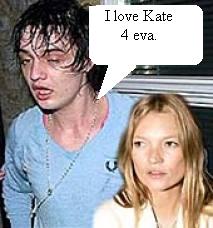 According to Chanel’s company head designer, Karl Lagerfeld, druggie Kate Moss is expected to reunite with the French firm.Â  Chanel famously dumped the catwalk queen last year for her nose being involved in a less fortunate purpose, snorting cocaine.Â

Lagerfeld states, “I think she will be more successful than ever.Â  Chanel will sign her.Â  She is born to survive.”Â

I rather see Kate Moss’ campaign as, ‘Kate Moss.Â  Born to be with charlie.’

Kate made news of another sort last week with ex-boyfriend Pete Doherty.Â  If ever there was an example of a true punk rocker, it’s Pete Doherty.Â  Erratic behavior, constantly in trouble with the law & causing a ruckus and, as always, sex and drugs.

After Doherty left court last Thursday after another appearance on drug charges, the 26-year-old Baby Shambles frontman ran to his gold Jaguar from the Thames Magistrates’ Court in east London.Â  Surrounded by photographers, fans & on-lookers, Doherty used aÂ  felt-tip pen to scrawl “I love Kate 4 eva” on the windshield.Â  He also wrote “QPR” in a tribute to his favorite European football team, Queens Park Rangers, before he drove off into the London traffic with horn blaring.

What a sweetie.Â  If I was Kate, I would instantly take the boy back, after all- he did remember to write her name before his favorite football team, right?Â  Ole Kate is the perfect mate for Pete, don’t ya think?Â  Both a little bit crazy and always with their nose in the white stuff.Â