.
You are here: Home / Mischief & Mayhem / By George, I Think We’ve Got Him: Boy George O’Dowd Spared Jail Time 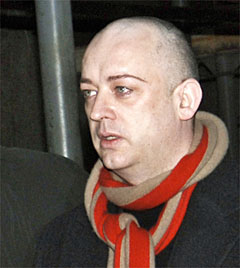 Boy George was able to plea bargain his case last week regarding his arrest last year onÂ a cocaine charge.Â  He agreed to enter a drug rehabilitation program and perform community service.Â  So, when you see the inmates off the interstate picking up litter, say a hello to George.

The former pop star, who’s real name is George O’Dowd, entered his guilty plea to third-degree false reporting if an incident in Manhattan Criminal Court.Â  Under the deal, O’Dowd will enter a drug program in England and perform five days (only five?) of community service in Manhattan.Â  He will pay a $1,000 fine and must avoid being nabbed by the coppers for the next six months.

“I am relived and happy that this case has been disposed of, and I would like to thank the judge, the district attorney and my attorney, Lou Freeman, for the fair and speedy way it was dealt with,” O’Dowd stated.Â  “I love New York, and I am looking forward to coming back and working in the states later this year (as a male prostitute).”