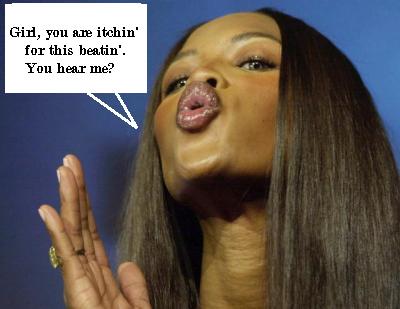 Ahh, the old ‘deny, deny, deny’ trick, an oldie but a goodie.Â  Superfreak Naomi Campbell denies hurling her cell phone at her assistant last Thursday, despite the fact thatÂ the “victim” received treatment forÂ four stitches to the back of her headÂ at nearby NYC’s Lenox Hill Hospital.Â

NaomiÂ faces seven years jail time, I can’t imagine that those years would be pretty for her, after being charged with assault inÂ a New York City Court.Â  Campbell denies the charge and saysÂ it was “falsely” brought against her as a revenge for sacking the same employee earlier Thursday.Â  Naomi calms our prevalent fears saying, “I am fine.Â  The police have been really nice.Â  It won’t be the first time I have been extorted.”Â  She must have left out, “Or the first time I had to hit the bitch.”

The judge assigned to Campbell’s case put up a bail of $3500, all Naomi could apparently afford after all her run-ins with the law, and demanded that she reappear in court thisÂ June where she will answer to her charge of felony assault.Â

And still Naomi Campbell remains employed by fashion designers everywhere.Â  CanÂ I get a job like that?Â  Beat up on my assistants, be on constant terms with the police and say I’m being extorted and still be able to show up to work the next day?!Â  That’s pretty sweet, must be what Pete DohertyÂ enjoys every day.