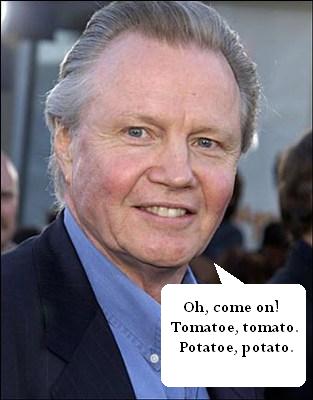 Jon Voight has soughtÂ for many years to repair his relationship with his estranged daughter Angelina Jolie.Â Â Through the years Voight has used the media toÂ make stabs at making amends with Jolie, to no avail.

Well, latelyÂ the Voightster hasÂ beenÂ using the media to tryÂ & see his grandchildren, but he had a bitÂ of a memory lapse when it came to their names.

The veteran actor Jon Voight wasÂ filmed at the BritishÂ Academy of FilmÂ and Television Arts TeaÂ Party this past weekend confusing his granddaughter’s name with that of the pop star Shakira.Â

Jon said for the cameras, “Maddox just had a birthday. Happy birthday, Maddox! Five years old–it’s a big one! You’re going to be a young man, and I send my love out to you. And send my love to…uh…Shakira…and Shahira…”

A befuddled Voight thenÂ asked the reporter, â€œIs it Shakira or Shahira?â€

The reporter then replied that the child’s name was Zahara, to which Voight replied,Â  “Shahara! Shahara!”

But you know, Voight could have been thinking of Angelina Jolie & Brad Pitt’s three-month-old Shiloh as well.Â  Who knows.Â  I think we need to shove Voight & Jolie into a cell & let them finally work out their damn problems.

AngelinaÂ & her father have not spoken for over four years, when Voight stated on Access Hollywood that his daughter needed to get help for her “mental problems.”