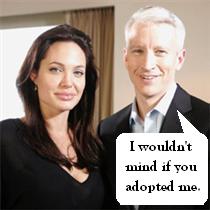 In an interview with CNN’s Anderson Cooper to be aired Tuesday, Angelina Jolie confesses that she & partner Brad Pitt will adopt another child in the near future.Â Â Just weeks after the birth of their first biological child together, theÂ famous couple are already looking into the future.Â
Â
“Next we’ll adopt.Â  We don’t know which–which country. But we’re looking at different countries. And we’re–I’m just–it’s gonna be the balance of what would be the best for Mad (Maddox) and for Z (Zahara) right now. It’s, you know, another boy, another girl, which country, which race would fit best with the kids.”

The couple’sÂ youngest child,Â Shiloh Nouvel Jolie-Pitt, was born on May 27 in the African countryÂ Namibia.Â  Jolie said her reason for giving birth in Namibia was that she loved Africa & wanted to take Zahara back to Africa.Â

“My other daughter’s African.Â  And I wanted to take her back to Africa.”

Jolie said she was terrified during the birth of Shiloh, which was by Caesarean section due to the baby being in a breech position.

“And you know, because you’re there for the birth, which I wasn’t for my first two kids, you’re just suddenly terrified that they’re not gonna take a first breath,” she said.

It’s a beautiful thing- being wealthy & having the ability to have your own colors of Benetton family, not to mention the time & means to help move the world into a better place.Â  So, if you have a lot of spare cash around & want your own personal goodwill ambassador- just give me a buzz.Â