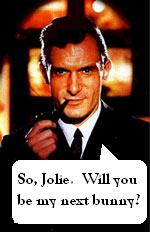 Playboy pimp HughÂ Hefner wantsÂ to strip Angelina Jolie down for his playful magazine once the actress has lost weight from giving birth to her & Brad Pitt’s baby Shiloh Nouvel.Â Â
Â
The recently turnedÂ 80-year-old tycoon is anxious to tempt the vixen into sharing her body with fans around the world.Â  Are you excited as a lark & cannot contain yourself dur to the anticipation- well then enjoy this shot & try to hold on.

Hugh suggests, “I’m hoping to bump into Angelina Jolie to get her to do Playboy after she’s had the baby.”

Hefner is a busy 80-year-old as he’s also planning a movie about his life.Â  Who would be best suited to play the Playboy pioneer?Â  Pee Wee Herman?Â  Philip Seymour Hoffman?Â  Jack Black?Â  Well, it looks like Hugh has made his personal choice with another Hugh.

Hefner is desperate to cast X-Men star Hugh Jackman in his biopic film about his life and the adult entertainment industry.Â