.
You are here: Home / Career Moves / Angelina Jolie Happier Than She’s Ever Been 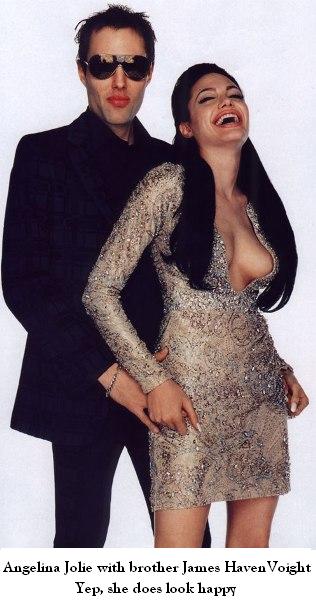 Two Angelina Jolie postsÂ in one day?!Â Â I know, I know.Â  But apparently she’sÂ happier than she’sÂ ever been and that’s damn important,Â right?Â  According to Jolie’s brother James Haven Voight with whom she received much attentionÂ due to their affinity for open-mouth kissing each other, Angelina is a happy girl.Â  Â

Haven & Jolie are very close siblings & it was James who she trusted to watch Maddox & Zahara as she was giving birth to Shiloh.Â  Haven is ecstatic forÂ Angelina & Maddox has welcomed his new sister into the Jolie-Pitt circle of trust.

Haven stated, “I walked into the room and it was so overwhelming I had to walk out. To see the father, mother, daughter–it was such a beautiful image that it overtook me.”

JamesÂ said the children “were very, very excited–especially Mad (Maddox), who was very aware of what was happening, that he was about to have another sister.”

After Shiloh was born, Haven brought Maddox to meet his new sister and says he “imitated the way Brad held her just perfectly.

“I’ve obviously seen my sister since her first year in this world, and to see her with her three children and Brad, I’ve never seen her happier.”