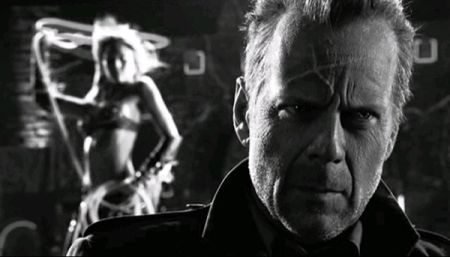 Dawson let the news slip at last weekend’s California Comic-Con comic book convention.Â  Rosario refused to give much information after the slip, but gaveÂ us some subtle hints.

Dawson revealed, “It’s all hush-hush but it may feature Angelina Jolie, it might be called A Dame to Die For and it may be shooting at the beginning of next year.”

So,Â Sin CityÂ may feature Angelina Jolie, it might be called this & that & it may be shooting at the beginning of next year.Â  Whew!Â  That’s what I call commitment to fence riding.

Angelina Jolie in Sin City would be a dream come true for many fans I would think.Â  Jolie in leather is almost too much goodness.