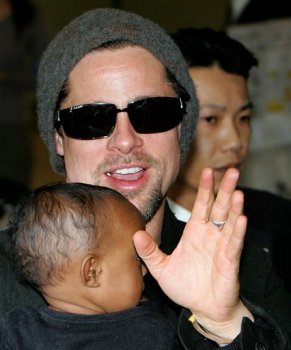 According to Brad Pitt’s granny the Fight Club actor will notÂ marry Angelina Jolie in the near future.Â  His grandmother reveals that he is still hurting from his divorce from Jennifer Aniston & that he’s not quite ready to marry again.

82-year-old grandma Betty Russell claims her grandson opened up his heart to her during a phone conversation following the birth of baby Shiloh.

She says, “Brad promised his last wife on their wedding day they’d be together forever, and they didn’t make it. He is a sensitive soul who just wants to make sure he can keep his promise this time around.”

Russell adds, “Brad has always wanted to have children and he is playing the father role very well. The family loved Jennifer. But he has got Angelina now and seems really happy with life.

“(Brad is) very close to (Maddox). He confides little secrets to him.”

Poor Brad Pitt’s grandmother.Â  Did she really know she was talking to a reporter when she gave this tell-all?Â  I’m thinking that Brad’s not too happy about this published revelation.Â  Maybe he’ll get extra fruit cake this year.