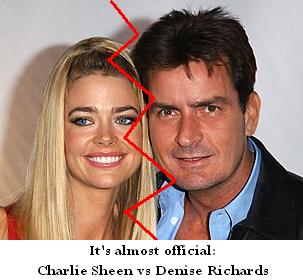 Charlie Sheen &Â Denise Richards settled the remaining issues of their divorce proceedings yesterday.Â  The couple who have been no holds barred in regards to the slandering & mud slinging only a divorce can bring out, have stated that their intention is to move forward in a positive way.

Sheen’s attorneyÂ along with Richards’Â lawyer made a statement outside a LA courthouse yesterday.

Sheen’s attorney stated, “Both parties have amicably resolved any outstanding issues on an interim basis.”

The restraining order which stated that Charlie had to stay away from Denise as well as their two children expired yesterday.Â  No word if Richards will renew the order or if Charlie is still a crazy buggar.

Richards is currentlyÂ sleeping with Heather Locklear’s ex Richie Sambora all over the world while Charlie is trying his best to win over real estate investor Brooke Mueller despite his shady track record.