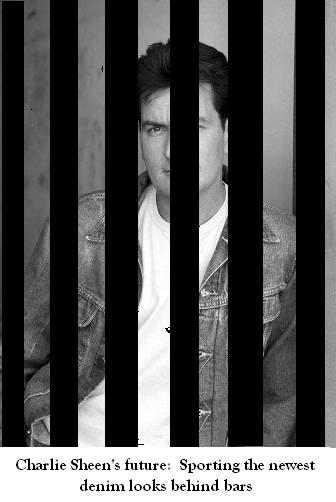 Jones’ mother Donna is mulling over filing a wrongful death suit against Sheen, thinking he drove her daughter to kill herself.

Donna Jones tells the Globe, “I’ve seen a lawyer about filing a wrongful death suit against Mr. Sheen. I think he didn’t slip her the pills–but he drove her to it with death threats.

“She’d (Chloe) call me 10 times a day telling me of her fears. She was terrified to death of the guy.”

Richards reveals, “I saw on the news that she had died from undetermined causes. When I asked him if he had anything to do with her death, he said he had ‘no comment’… This scared me.”

Either all this Charlie Sheen mess means he’s one very unlucky guy or the is seriously deranged.Â  Maybe heÂ saw his father Martin Sheen’s Apocalypse NowÂ film a few too many times.