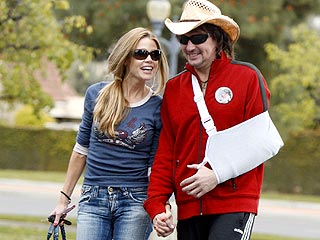 Amid reports that Bon Jovi guitarist Richie Sambora &Â “actress” Denise Richards have split, Richards’ rep has stated that the two are still hot & heavy and that in fact, Denise is flying out to meet him on tour today.

RichardsÂ is flying intoÂ Dublin, Ireland, where Sambora is set to rock the stage with Bon Jovi on Saturday for their ‘Have a Nice Day’ tour.

Richards’ representative assured one and all that, “Denise and Richie are still together.”Â  Whew, I thought I was going to have to spend the weekend with my head in the sand weeping and begging God to get the two back together.

A source told US WeeklyÂ that Richards will be leaving her children, Sam, 2, and Lola, 11 months, with her parents while she gallivants around Europe with her beau.Â  I can’t wait for the pics of Sambora & Richards on the terrace of their hotel- hopefully we’ll get to see another lap dance.Â

Bon JoviÂ will have a short break after their Dublin show allowing the love birds to spend a weekend together inÂ Europe.Â  Let’s hope Sambora can get away from all the Bon Jovi groupies to spend time with his #1 groupie.

Sambora wasÂ recently quoted telling fans in Germany that he was “single and ready to party.”

But a close friend of Richie says, “Richie was just being a rock star. His public and private personae are different.Â  When you’re a rock star, being carefree is part of the game.”

Could someone please tell me why Bon Jovi is still around?Â  Wasn’t ‘Slippery When Wet’ enough already?Â  It’s crazy what people will subject themselves to.Â  Are Bon Jovi groupies 47-year-old lonely women who fell for his fro & constant sunglasses?Â  Jeez.