.
You are here: Home / Career Moves / Denise Richards & Charlie Sheen Take it to the Mall 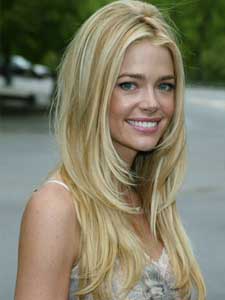 In a hilarious new turn of events, Denise Richards has launched thrown another blow at the estranged husband Charlie Sheen.Â  Richards has begun development ofÂ a kids’ clothing line, one month afterÂ Sheen debuted his own collection of kidswear.Â  Maybe the new Richards’ line should be called ‘KickAssWear’.
Â
It’s funny isn’t it, the crazy couple are now taking their fight to the shopping malls and boutiques of America where their clothing lines will bitterly compete in the oh so lucrative children’s clothing market.

Bad boyÂ CharlieÂ launched his Sheen Kidz last month, we justÂ love to play around with those letter ‘z’s, whileÂ Denise has announced she is launchingÂ ‘Kidtoure’ this summer.Â  I think I still like KickAssWear.Â

Maybe next they will take their battle to the streets, I’m thinking of a clothing line for pimps & sex workers.Â  It could be called ‘I Just Might Kill You Wear by Charlie & Denise’.