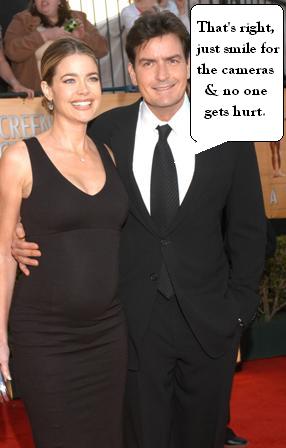 According to legal papers filed by former Bond girl and Richie Sambora kisser Denise Richards, she leftÂ Charlie Sheen last year because he’s a crazy son-of-a-bitch.Â Â
Â
In legal documents filed Friday in Los Angeles,Â Denise claimsÂ Sheen wasÂ obsessed with conspiracy theories surrounding the 9/11 terrorist attack and the death of O.J. Simpson’s wife, Nicole.Â  I guess he thinks the glove did fit.Â  Sheen reportedly even showed Richards photographs of the slain Nicole (how does one get those?) and appeared to be mesmerized by the autopsy photos.Â  At this point, Richards knew it was time to get packin’, grab the gun and the luggage.

“Respondent began to obsess about vaccines being poisonous, about 911 being a conspiracy, purchasing gas masks on the Internet, and putting guns under our coffee table so that they would be within reach if someone broke into our house.

“Respondent also displayed what I can only describe as an abnormal fascination with Nicole Simpson’s death and showed my mother and I her autopsy photographs, which I found very disturbing.

“I had one small child and was pregnant and I was afraid to leave him; I was also afraid to stay with him.”

Sheen denies all the claims against him, don’t they always?Â  I mean come on!Â  If any one of these things are true, you have a true head-case on your hands.Â

Richards eventually filed for divorce but the couple tried to reconcile at the end of last year (yeah, I too think it’s hot when my beau threatens to kill me), only to say goodbye for good in January.

The Wild Things actressÂ recently won aÂ temporary restraining order, which does not allow Charlie to come within 300 feet of her or their two children, with claimsÂ thatÂ the actor has made threats to her life.Â  Does this explain why she ran into the arms of her best bud Heather Locklear’s soon-to-be-ex-husband Richie Sambora, I don’t know.Â  It might, however,Â explain that sling on his arm.Â  The Sheenster can be quite an ominous enemy.

Now, we can’t leave sorry Charlie out, here he is now.

“I move forward and I maintain my integrity … and focus on my children,” Sheen told Entertainment Tonight.Â  “Richards’ filing is a “heinous document of fiction.”Â  Then what a work of fiction it is.Â  Maybe Denise should consider a career as a writer is she’s that creative.

“I’m deeply saddened because this is clearly demonstratingÂ a wanting and willful attempt at what I describe as a radical and transparent smear campaign and clearly a departure from sound, sane, responsible co-parenting,” Sheen said.Â  I’m sorry, you cant say ‘smear campaign’ without sending me into fits of giggles, especially when you’re talking about a Hollywood divorce and not a political election.Â  Who even says smear campaign?Â

“It is a reaction to a failed marriage, a reaction to some twisted desire–real or imagined–to hurt, to punish, to discredit, to completely torpedo, to undermine my perception as a responsible father … a contributing father, a guy who would give his life for his children.” Sounds like he was prepared- ‘completely torpedo’?Â  Man, this guy can talk a hurricane into thinking its a puppy dog.

Charlie Sheen went on to say that Denise Richards is “the only one entirely culpable for putting these radical allegations out for public consumption … my children included.”

Whew!Â  What happened to making divorce easy on the kids?Â  I think Charlie Sheen & Denise Richards both need a visit from Oprah.