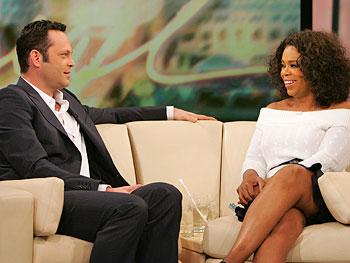 YesterdayÂ Vince Vaughn talked Jennifer Aniston on The Oprah Winfrey Show.Â  Apparently both Vaughn & Winfrey have a thing for Aniston with each trying to out-compliment the other.Â

Vaughn praised Aniston by sayingÂ “Jennifer’s great. She’s one of my favorite people.”

To which Oprah replied, “She’s one of mine, too.”

And then Tom Cruise entered stage left and started jumping on couches saying, “Xenu be praised, I love Jennifer too!”

When OprahÂ questioned VinceÂ on the possibility of children he stated,Â “I think (having children) takes a lot of focus, takes a lot of attention. I think it would be nice at some point to have a different priority. I think that time would come.Â  But not any time in the near future for me. No, I have not talked about having kids with Jennifer.”

And chiding reports of their lavish wedding paid for by Oprah, Vince commented, “First we have to have the $8 million wedding.”

If it came down to a mud wrestling match who would win:Â  VinceÂ Vaughn, Oprah Winfrey or Tom Cruise?Â  I’m going to haveÂ to go with the Oprah,Â ever since The Color Purple, I knew she could pack aÂ punch like nobody’s business.Â