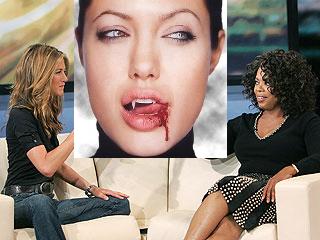 Angelina Jolie has confided in a close pal, her first mistake,Â how she trulyÂ feels about her love partner Brad Pitt’s ex-wife, Jennifer Aniston.Â  The first cat paw punch has been thrown, retaliation at hand?Â  Jolie’s friend Tonya Hart is quoted inÂ  StarÂ magazineÂ saying the actress was enraged by Aniston’s behavior on The Oprah Winfrey Show last September claiming that she was “milking” her split with Pitt, let’s call it “Pitting”.

The Oprah appearance “friend” Hart is referring to is the September 19th, 2005 20th anniversary episodeÂ which was theÂ first TV interview Aniston gave after her marital breakup with Brad Pitt.Â  During the interview Aniston stated that she did want to have kids, sheÂ was ready to start dating again and that what she was looking forward to most after the Brad-yearsÂ was, “I love the unknown.Â  I love the discovery of what will be happening and just kind of sitting back and not knowing”.Â  Aniston went on to further discuss her marriage with Pitt and what she had learned from it.Â

When Oprah tried to get Angelina Jolie to appear on the show soon after the Aniston interview, Jolie cut ties with Winfrey stating she wanted nothing to do withÂ Oprah or the show.

Tonya Hart claims Jolie said, “Oh my God, it makes me want to throw up!Â  She shot her mouth off and Oprah took it all in.Â  The audience took it all in.Â  They were all against Brad and me from that moment on.Â She wanted people to feel sorry for her that her marriage was down the pan. Brad and I couldn’t defend ourselves.”Â  Sounds like Jolie is “Jenning” the situation.

Hart adds, “Angie told Oprah she was extremely upset with her and wanted nothing to do with the show, even though Oprah said, ‘Don’t bear a grudge against me (or I will eat you when you least expect it).'”

I was beginning to wonder if there was even going to be a bat of the eye between these two vixens.Â  But now it’s on.Â  Watch out, another cat fight ahead.Â