.
You are here: Home / Mischief & Mayhem / All About Nicole Richie: Her Nose, Her Pal Paris & Her Weight 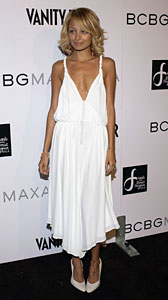 The Simple Life star Nicole Richie is having a case of celebself-innerflection which is my new word for celebrities looking inward and reflecting.Â  You like it?Â  Richie has a lot on her plate these days:Â  a big nose to look at, drifting away in the wind due to her diminishing body weight and listening to her ex-pal Paris Hilton diss her in the news every other day.

Let’s tackle the nose first, it might be a long climb getting there, but we’ll make it.Â  Nicole Richie is considering having plastic surgery on the thing she calls her nose.Â  She has apparently taken inspiration from the famous nostrils of Kristy Hume.

“If I could change anything about myself it would be my nose, I hate it.Â  I’d get a nose done like Kristy Hume’s; she has my kind of nose but smaller.Â  I see really good nose jobs in LA, but it’s a big decision.”

Richie is right about one thing, it is a ‘big’ decision, for the nose that is.Â  The daughter of Lionel Richie is dealing with something quite opposite regarding her body weight, she appears to be loosing pounds by the hour, growing smaller.Â  The incredible large-nosed shrinking woman?Â  One minute the dress fits, the nextÂ minute she’s blowing away in the wind without it.Â  But she doesn’t appreciate the thin accusations by the media and her friends.

“Am I thin?Â  Yes, no doubt about it.Â  But to say I’m on the verge of death is just untrue.Â  My family gets really upset to see people writing these lies about their child.”Â  And if you don’t want to hear Lionel sing 24-7, you had better watch the hell out.

Understandable.Â  But if Calista Flockhart looks like a buxom, voluptuous and shapely woman compared to you, I think I might consider a few extra milkshakes.

The Simple Life co-star and ex-pal Paris Hilton is even weighing in on Richie’s thin appearance, “That’s not normal.Â  I can’t believe it.Â  She looks horrible.Â  It’s really sad.

I’m not sure we can trust the place that Paris is coming from since the hotel heiress has vowed to “never speak with her (Richie)Â again- ever” despite the upcoming The Simple Life 4:Â  Till Death Do Us Part series, although it looks like they will not have to film any scenes together.Â  It does beg the questionÂ if the two can work together for the fifth season of Simple Life, which both are under contract for.Â  But, I’ve always liked a good little cat fight and maybe it will really be till death do us part.Â  Meow!