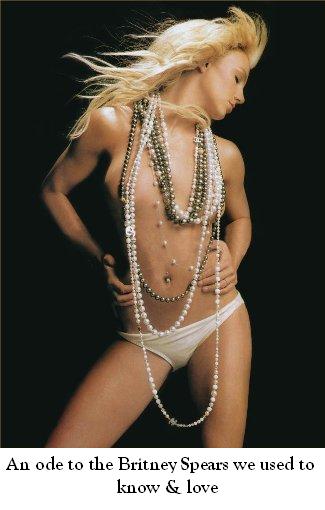 Britney SpearsÂ is holding aÂ press conference at the Los Angeles Convention Center today.Â  It’s almost been a millennium since she held her last conference, so this is kinda big, likeÂ her new look, big.Â  Anyone else miss the old Brit?Â  The attractive one with a convincing smile, not the one we see today trying to smile throughÂ the K-Fed marriage & dropped babies.

What is this press conference going to be about, Britney?Â  I’m thinking she either captured Osama bin Laden withÂ her teeth in the woods; or sheÂ has converted to Scientology; or she’sÂ finally coming to her senses and leaving her red neck husband Kevin Federline; or she’s going to reveal what everyone and their brother already know- she’s pregnant yet again, and a baby girl is on the way.Â

Britney has yet to reveal why she has invited select media,Â journalist and record industry reps to the convention center, butÂ one question seems to tap at my brain-Â will K-Fed be a part of this special Spears talk?Â With his new record on the loose, will he try & upstage his wife for musical attention?

“K-Fed’s the bomb now,” says a friend of the couple. “He’s the one who’s cut a record and performed in public most recentlyâ€”and who doesn’t look totally gross in sweat pants. Britney’s got to do something other than drive around with her baby on her lap to get attention. I guess this ‘mysterious’ press conference is it.”

News has circulated that there may be marital problems between Britney Spears & Kevin Federline.Â  Reports of K-Fed’s marijuana use, compulsive spending andÂ his practice of a hands-off theory of parenting have culminated to an unhappy marital affair.

“She can’t stand the thought of playing second banana to a guy who used to carry her [sanitary napkin] bag,” said the friend. “But whether she’s leaving Hollywood, quitting show business, or running for governor, all eyes are going to be on K-Fed if he shows up today.”

To tell you the truth, I’m hoping for the Laden in her teeth scenario.