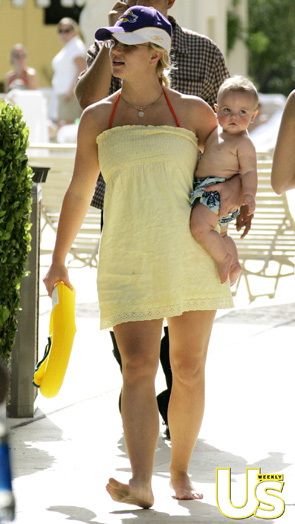 Is seems like it was just yesterday that Brit was pregnant.Â  Ah well, I guess we’re going to need another birthing sculpture.Â  As if dropping one child repeatedly wasn’t enough, Britney Spears, 24,Â and Kevin Federline, 28,Â are expecting another child.Â  Does this news in some way relate to the Brit & K-Fed ruckus this weekend & Spears skipping out on Federline’s Las Vegas debut party (pronounced ‘parte’)?Â  Hmmmm…

Did the conversation go a little something like this, “Listen babe, I love you.Â  What I mean to say is that I love your tight ass, which isn’t looking so tight these days by the way, and I love your retail value.Â  But damn, girl.Â  I can’t help it if I’m a fertile son-of-a-bitch.Â  I can just walk by a woman and get the bitch pregnant.Â  I’m what you would call a walking sperm bank.Â  Yeah, that’s it, a walking sperm bank.Â  Damn, that’s pretty good, I’ll have to remember that one.”

“But, K, I don’t know if I want to have another baby.Â  I’ve already dropped this one too many times to remember, we’ve had DCFS out to the house and I can’t even think to put baby Sean in the car seat.Â  What are we going to do with a second child?Â  And I need to start getting this bod back in shape for MTV, not stretching it back outÂ again for another red neck child.Â  I just don’t know.Â  Maybe we need some time apart.Â  Yes, that’s it, some time apart.Â  Time for me to get my sanity backÂ & try to understand why I married you in the first place.”

“Listen bitch, our situation is different. I ain’t gettin’ no divorce. F%$k that! I don’t believe in that shit. Once you get married, you’re in it for the fight. Nick and Jessica did their whole thing together. They really blew up together on that show. They deserve whatever they get and you deserve whatever you get, Brit.Â  Is that what you want, to fight?Â  ‘Cause I’m ready for that shit, Brit.Â  You bring it on, girl.”

“I’m going back to the hotel, enjoy your stupid little debut party.Â  By the way, the critics are right.Â  You really do suck.”

I think it went exactly that way.

Apparently the pregnant news was finally confirmed by US Weekly when Spears was spotted poolside atÂ Caesar’s Palace in Las Vegas this past weekend sporting a red bikini and with a new bump.

This will be the second child for Britney Spears and husband Kevin Federline.Â  The couple, who have been married since late 2004, have a seven-month-old boy, Sean.Â  Federline has two children from a previous relationship with Moesha star Shar Jackson, whom he ran out on while she was six months pregnant.Â  What a hottie.

All I can say is that I hope Britney Spears comes to her senses and soon, K-Fed is an irksome fungus swallowing the poor girl into redneckness.