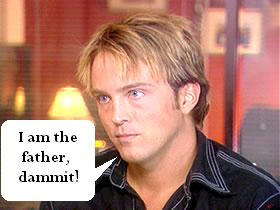 Well, who is the father of Anna Nicole Smith’s newborn daughter Dannie Lynn Hope?Â  Anna Nicole’s lawyer & longtime friend Howard K. Stern stated on Larry King Live that he is the proud father of the little one, but ex-love interest photojournalistÂ Larry Birkhead is claiming paternity.Â

Birkhead is demanding a DNA test to prove who the father actually is, he has already stated that he plans to fight for custody of the child.

Larry posted on his website, “I AM THE PROUD FATHER… The whole thing is laughable. It was obvious that even Larry King didn’t believe what Howard K. Stern was saying.”

Birkhead also revealed to Us Weekly magazine, “I have asked for a DNA test and I welcome it.”

Although there is no word as of yet who the actual father is, Birkhead stated,Â “I am in good spirits this morning because I know I am the father of the child.

“I look forward to having a relationship with my new daughter.”

Either Larry Birkhead is a loon or the father, or a loony father.Â  What do you think?