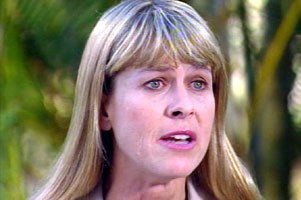 Crocodile Hunter Steve Irwin’s widow TerriÂ has refused to watch the footage of her husband’s death by a stingray barb to the heart off the coast of Australia.Â  Even though Steve had stated before his death thatÂ ifÂ he shouldÂ ever die on tape, he wouldÂ wish that footage to be shown.

In an interview to air tonight with Barbara Walters on 20/20 Terri stated, “What purpose would that serve?”

Steve was filming a specialÂ underwater film for his daughter Bindi’s new TV show when the stingray struck with its poisonous barb.