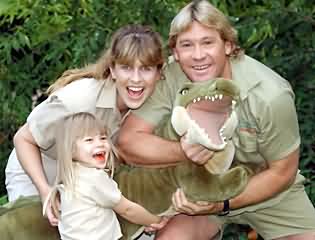 Crocodile Hunter Steve Irwin’s widow Terri has spoken about herÂ grief for the first time to the press about her husband’s untimely & sudden death.

In an interviewÂ with Australia’s Channel 9, Terri reveals that despite being heartbroken and lying on the floorÂ “curled up on the floor in a fetal position” she has received much encouragement and support from her eight-year-old daughter Bindi.

Terri stated that Bindi tells her mom, “She says, ‘Mummy, why are you worried? Daddy’s still with us.'”

Mrs. Irwin was floored by the overflowing love from the memorial service.Â

She says, “I knew people would be missing Steve, but the feelings of love and support from Australians was just overwhelming.

“He would have said, ‘Crikey mate, I don’t believe this.’ I love Australia and I’m a lucky woman.

“Just thank you so much. Your thoughts and prayers are really felt and they are going to help me get through–and I will.”

Terri recalled the moment of learning of Steve’s death by a stingray barb to the heart on September 4 through a call made by manager John Stainton.

“I am still at the stage where I think he’s going to come home and it didn’t really happen.”

Barbara Walters also interviewed Terri,Â the emotional chat will air Wednesday on 20/20.Â
Walters admits she was very touched by Terri and her courage.

She says, “You almost have the feeling that she’s (Terri) channeling him. She feels he’s there… They’re just an amazing, touching, wonderful family. It was a very special trip to me… She’s a marvelous woman.”