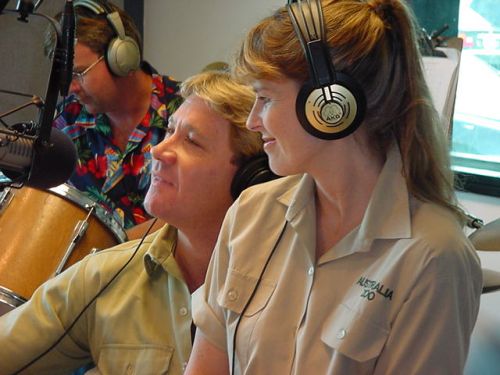 The announcement came directly from Steve’s widow Terri, who has been in seclusion publicly since her husband was killed tragically by a stingray barb to the chest last Monday.

Larger venues were suggested for the memorial service to accommodate the overwhelming reaction from fans around the globe.Â  But Terri insists that the zoo Steve’s father developed is the most suitable as a memorial to the naturalist.

Terri’s statement read, “I cannot see how a memorial service would work in any other place other than the Crocoseum which he built here at the zoo and of which he was so proud.

“I would therefore ask that everyone please bear with me in this wish and help me to make this happen.”

The service will be broadcast live on TV across Australia, the US & Asia.Â  Terri; the Irwin’s eight-year-old daughter Bindi; Steve’s father Bob & manager John Stainton are all slated to speak at the memorial.

Â A private funeral took place at the Austrlia Zoo this past Saturday after his family turned down Prime Minister John Howard’s offer of a state funeral, saying Steve was just a normal, everyday bloke who would prefer the zoo over state fanfare.