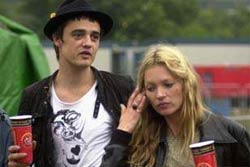 TheSuperficial broke the news today about a marriage united in drug use and bad hair.Â  The tabloid-ridden off-and-on-again couple Pete Doherty & Kate Moss are to marry later this very year, I guess Morrissey will forgo the ceremony.Â  Hopefully they’re sterile by now and will not reproduce, I’m afraid Doherty & Moss’s parenting skills would be worse than the infamous Courtney Love.Â

“Kate Moss and Pete Doherty are planning to marry later this year, with Doherty telling The Sun::

Additionally, the Daily Star is reporting that Kate is paying $20,000 to help get Pete’s teeth fixed after years of smoking, drinking and poor personal hygiene have destroyed them. A source says:

“The only way to save their romance is to save his teeth. Pete suffers from terrible halitosis because he rarely brushes his teeth. But he’s terrified of losing her so he’s agreed to see the dentist.”

I’ve decided to bump Pete Doherty up from part-time homeless man to personal hero. Anybody that can be arrested every other week for the past year, get beaten up by his girlfriend, and look generally disgusting while still managing to trick a supermodel into marrying him must be some sort of mind manipulation God. I’m afraid to be in the same room as him in the off chance he works his voodoo and I end up naked in a dumpster.”