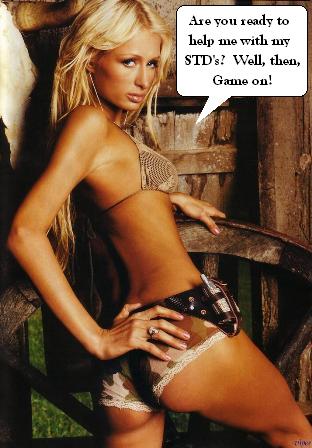 The Simple star and hotel heiress Paris Hilton will be releasing her own line of mobile phone games, maybe that’s what Hilton & NiarchosÂ were working on at that Lakers game. Hilton has teamed up with developer Gameloft to create the games which will be launched this summer.Â  Gameloft stated that the first game will be “geared to tweens/teens and fans of Paris Hilton.”

Gameloft has not given any details about the game butÂ will probably be in theÂ category of simpler titles that includes puzzlers and card games.Â  I’m thinking of a game where you help Paris get rid of pesky STD’s by solving puzzles and card games, if you lose too many times, Paris dies of AIDS.Â  A little harsh, yes, but I can see it being a real winner in the gaming world.Â

Paris tells MTV, “My phone has become an all-in-one entertainment device and mobile games are an integral part of that.Â  Mobile gaming is really hot right now, and I’m excited to be a part of this project.”Â