.
You are here: Home / Paris Hilton Needs Her Own Category / Paris Blues 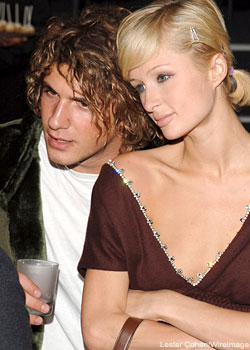 I bet you can’t guess who’s in the news again.Â Â Looks likeÂ being a celeb isn’t what it used to be.Â  Two Las Vegas clubs have been put on notice for allowing Paris Hilton‘sÂ boyfriend – for now- Stavros Niarchos into their establishments on New Year’s Eve.

Apparently he has a really bad stench about him that cockroaches everywhere follow.Â  SoÂ letting Stavros into your club is like sending an invitation to the cockroach nation.Â

No, really he is only an underageÂ 19-year-old boy toy that is not legally allowed into 21+ clubs.Â  The two Vegas clubs, Tao Asian Bistro in The Venetian & Body English at the Hard Rock Hotel, received warning letters last month from the Clark County License Department after investigators determined that Niarchos was given access to the clubs.

A security guard caught on tape escorting the couple into the club was fired and the doorman who did not ask for ID was suspended.Â  Jeez, you’re screwed on both ends- let Paris & boy in, you’re fired OR eject Paris & boy, you have a vindictive, famous, angry Hilton on your hands.Â  Hmmm… which one is worse?Â  Unemployment or hell-on-earth?Â  I suppose they did make the right decision.Â