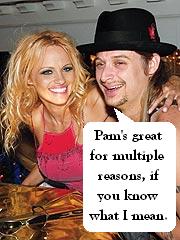 The couple are then planning on walking down the aisle another three times in the US.Â  Well, practice does make multiple perfect, or so I hear.Â  Pam & Kid will tie the knot in Malibu, Detriot & Nashville.

Anderson reveals, “We are going to have a couple of weddings.

“We have to do Malibu. We have to do Detriot. And we are going to do Nashville. We are starting (this weekend) in the south of France.”

She adds of any pre-wedding jitters, “I am fine. I am not nervous. It is a good decision.”

Won’t it be funny after all these damn weddings when Kid & Pam only make it a year.Â  Are they the going to have four divorces?